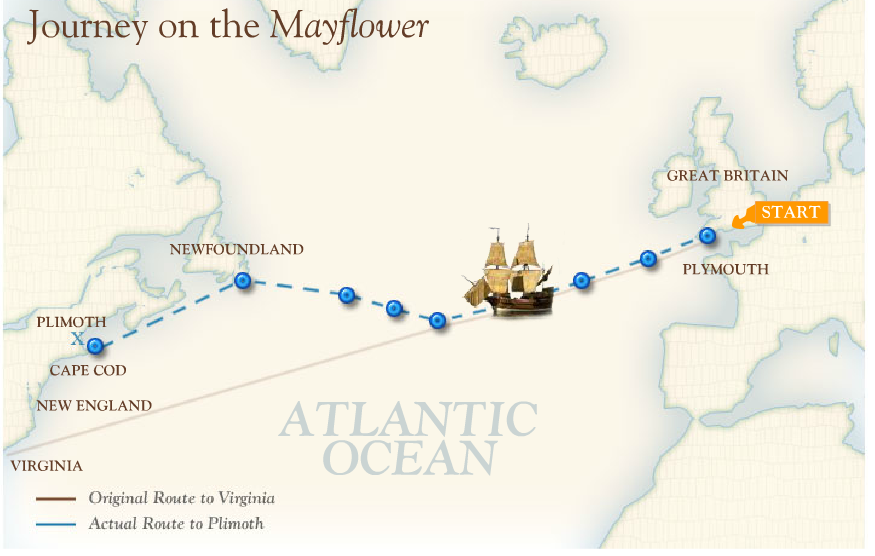 Statement #1: The passengers on the Mayflower were called Pilgrims.

Fiction - The passengers on the Mayflower were Protestant Separatists who called themselves "Saints".  They hoped to establish a new church in the New World.  The term Pilgrims did not become a common term to describe this group until the colony's bicentennial in 1820.

Statement #2: The passengers of the Mayflower were Puritans.

Fiction - The colonists who arrived on the Mayflower were Separatists.  This group did not want to pledge their allegiance to the Church of England, where as the Puritans wanted to reform the Church of England from the inside.  These two groups are distinctly different from one another.

Statement #3: All passengers of the Mayflower were part of the same group.

Fiction - Only about 40 of the 102 passengers were Separatist Saints.  The remaining passengers were secular colonists (those who were not connected to church or religion) called 'Strangers'.

Statement #4: The Mayflower Compact was the first document to establish self-government in the New World.

Fact - The Mayflower Compact, signed on November 11, 1620, promised to create a civil body of politics governed by elected officials and just and equal laws.  The compact swore allegiance to the English King, but did establish self-governance, creating the first attempt at democracy and setting the stage for future colonists seeking independence from the British.

Statement #5: Without the assistance of Native Peoples, the new settlers at Plymouth would likely have died.

Fact - After the first winter, which was spent living onboard the Mayflower, only 53 of the original 102 passengers had survived.  Once the group moved ashore in April of 1621, the new colonists faced many challenges.  During their first winter in the New World alone, more than half of the population died from malnutrition, disease, and exposure to the harsh weather.  Without the help of the area's native population, it is likely that none of the colonists would have survived.

Statement #6: The colonists held a dinner of thanksgiving, inviting a few native peoples to eat alongside them.

Fact and Fiction - There was a 'First Thanksgiving' of sorts, but instead of a single meal, a three-day festival was held to celebrate the colonist's first successful harvest.  The celebration was held sometime between late September and mid November of 1621.  The colonists were outnumbered by their guests by a whopping 2 to 1 ratio.

The Mayflower Compact was signed on November 11, 1620 shortly after the ship the Mayflower dropped anchor in Provincetown Harbor.  The Mayflower compact was created in response to mutinous speeches from passengers.  Disputes over where the settlement would be created were a major reason for discord.  The colonists had been given permission to settle in Virginia (whose northern border at the time extended north to what is now New York), and the colonists had originally planned to settle near the mouth of the Hudson River.  Because of where they originally landed, along with the dangerous shoals and an almost shipwreck when they attempted to sail south, the colonists decided to settle outside of the legal bounds of the Virginia Company patent they were sailing and colonizing under.

The original text of the Mayflower Compact no longer exists, and the first text was published in 1622.  The earliest surviving handwritten copy of the text was included in Governor William Bradford's manuscript. 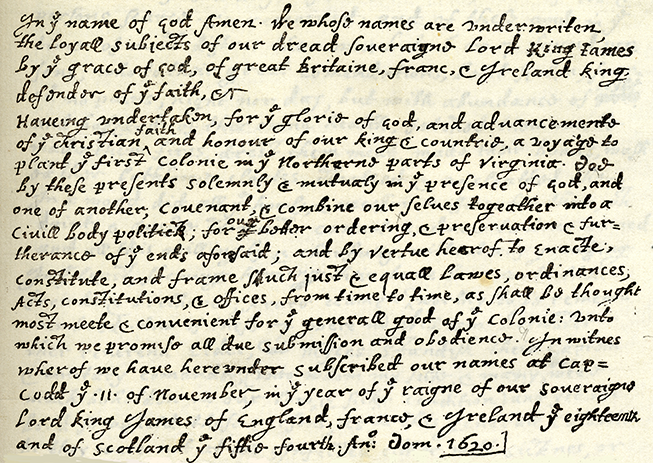 In ye name of God Amen· We whose names are vnderwriten,
the loyall subjects of our dread soueraigne Lord King James
by ye grace of God, of great Britaine, franc, & Ireland king,
defender of ye faith, &c

Haueing vndertaken, for ye glorie of God, and aduancemente
of ye christian ^faith and honour of our king & countrie, a voyage to
plant ye first colonie in ye Northerne parts of Virginia· doe
by these presents solemnly & mutualy in ye presence of God, and
one of another, couenant, & combine our selues togeather into a
ciuill body politick; for ye our better ordering, & preseruation & fur=
therance of ye ends aforesaid; and by vertue hearof, to enacte,
constitute, and frame shuch just & equall lawes, ordinances,
Acts, constitutions, & offices, from time to time, as shall be thought
most meete & conuenient for ye generall good of ye colonie:  vnto
which we promise all due submission and obedience.  In witnes
wherof we haue herevnder subscribed our names at Cap=
Codd ye ·11· of Nouember, in ye year of ye raigne of our soueraigne
Lord king James of England, france, & Ireland ye eighteenth
and of Scotland ye fiftie fourth. Ano: Dom ·1620·|

In the name of God, Amen. We whose names are under-written, the loyal subjects of our dread sovereign Lord, King James, by the grace of God, of Great Britain, France, and Ireland King, Defender of the Faith, etc.

Having undertaken, for the glory of God, and advancement of the Christian faith, and honor of our King and Country, a voyage to plant the first colony in the northern parts of Virginia, do by these presents solemnly and mutually, in the presence of God, and one of another, covenant and combine our selves together into a civil body politic, for our better ordering and preservation and furtherance of the ends aforesaid; and by virtue hereof to enact, constitute, and frame such just and equal laws, ordinances, acts, constitutions and offices, from time to time, as shall be thought most meet and convenient for the general good of the Colony, unto which we promise all due submission and obedience. In witness whereof we have hereunder subscribed our names at Cape Cod, the eleventh of November [New Style, November 21], in the year of the reign of our sovereign lord, King James, of England, France, and Ireland, the eighteenth, and of Scotland the fifty-fourth. Anno Dom. 1620.

Source
Bradford's Manuscript "Of Plimoth Plantation: The story of William Bradford's first-hand account of the Mayflower voyage and the settling of Plymouth from the State Library of Massachusetts

Jump to a Section

The Mayflower: the ship 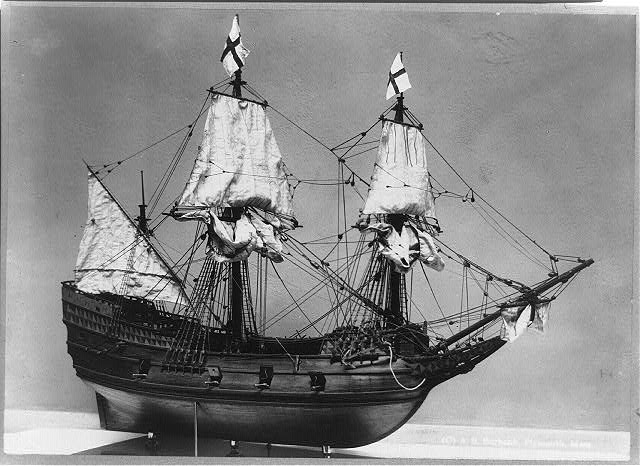 The ship, the Mayflower, carried colonists from Plymouth, England to Plymouth, Massachusetts in the New World.  These colonists established the first permanent New England colony in 1620.

There is no detailed description of the original ship, but marine archaeologists estimate that the square-rigged ship measured 90 feet long, weighing 180 tons.  Some sources suggest that the Mayflower was constructed in Harwich, England shortly before the English merchant Christopher Jones purchased her in 1608.  Before her most famous voyage, the Mayflower was a cargo ship, often used to transport wine, hats, hemp, Spanish salt, hops, vinegar, and more.

After her voyage to the New World with the colonists, little is known about the ship.  She was appraised in 1624 which provided information about the ships gears on board at the time, as well as muskets and other arms.  The final fate of the Mayflower is still an unsettled issue, with many believing that she was broken up by a shipbreaker's yard in England.

Books on the Mayflower

We Shall Remain: America Through Native Eyes

Created by PBS and American Experience, We Shall Remain is a provocative multi-media project that establishes Native history as an essential part of American history. The centerpiece of this initiative is a television series that tells five heartbreaking, yet inspiring stories. Together they highlight Native ingenuity and resilience over the course of 300 years. The series upends two-dimensional stereotypes of American Indians as simply ferocious warriors or peaceable lovers of the land.

Episode: After the Mayflower
This episode begins in March 1621, in what is now southeastern Massachusetts, when Massasoit, the leading sachem of the Wampanoag, negotiated with the ragged group of English colonists.
Run Time (1:17:03)

View the full series of We Shall Remain: America Through Native Eyes.

Bradford's Manuscript "Of Plimoth Plantation: The story of William Bradford's first-hand account of the Mayflower voyage and the settling of Plymouth from the State Library of Massachusetts.